‘Life should not exist. This much we know from chemistry.’

We all love a good mystery, and that’s what we get when we turn our minds to consider the origin of life.  While we have made monumental strides in so many areas of science, with knowledge expanding exponentially, when it comes to origin of life studies, the scientific research is reaching an impasse. As Professor Tour states above, the more we discover in biochemistry and other related sciences, the more impossible it seems that life should ever have arisen. And yet life flourishes all around us and within us. Life exists! That much is certain. ‘How?’ and ‘Why?’ truly are a mystery, even though the scientific literature seeks to portray the mystery as solved.

Read an article by Nobel Laureate Professor Jack Szostak in the scientific journal Nature, May 2018, and you would get the impression that scientists knew the steps by which life came into existence. 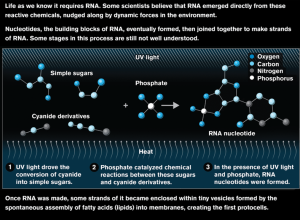 With the accompanying illustration, it all seems very simple: take some cyanide, expose it to UV light, add some phosphate, and hey presto … RNA nucleotides are formed, paving the way for the creation of the first protocells.

But not so fast. Consider the language he is using: believe, nudged, spontaneous assembly …

While Professor Szostak covers himself by saying ‘some stages in the process are still not well understood’, the article makes it seem otherwise, and Professor Tour takes issue with the way it was written. He writes that to simply say ‘in the presence of UV light and phosphate, nucleotides were formed’ is “disingenuous and it betrays the depth of the exacting chemistry involved”.

The ‘exacting chemistry’ needed to synthesise RNA nucleotide within a laboratory is outlined on the left. This was achieved by Professor Sutherland, one of the great synthetic chemists, and it took him 10-12 steps with multiple more reagents. Certainly not the one step Szostak suggests. To show the difficulty further, take the simple compound of cyanoethyne. Tour says, “This requires the generation of ethyne by addition of water to calcium carbide and bubbling that through HCN and copper(II) chloride. Try that in a puddle somewhere!”

Anyone can tell a story, even Nobel Laureates, but if we want to be true to the science before us, we must conclude that as our understanding of the complexities of the chemistry needed for the existence of life increases, so the probability of the matter randomly synthesising of its own accord decreases towards zero. This naturally leads us to conclude that a materialistic worldview alone is not able to adequately explain the origin of life.

Materialism is a False Foundation

This must be stated clearly, for it is the predominant worldview of academia, and while in many areas of science, it is able to walk hand in hand with the research, in the area of origin of life research it is woefully lacking, and is perhaps the reason that for many decades, little progress has been made.

The reason materialism is an inadequate worldview in this area, is that life itself has an immaterial quality. You can place two cells, plants or people side by side, both with exactly the same material composition, yet one could be living and the other dead. The question of where that ‘spark’ of life comes from is very much a mystery, but we can safely say that it does not come simply from the material.

In addition to materialism not having an adequate explanation of the origin of life, it also has nothing to say about the purpose of life. Materialists conclude that life has no purpose, but again, the claim does not match reality. The question of purpose is often on our minds, and indeed is critical to our long-term health and well-being as humans. With no purpose, we quickly descend into a state of hopelessness, and this is having real and tragic consequences in our society.

Materialism is a false foundation. It has no adequate explanation of the past. It gives no meaning for the present and offers no hope for the future. It has been shown to do as much good as the emperor’s new clothes. We must therefore look for our explanation of the origin of life somewhere else. Let us look to something that is itself immaterial – information!

Professor Kuppers, in his book ‘Information and the Origin of Life’ (1990), wrote that “the problem of the origin of life is clearly, basically equivalent to the problem of the origin of biological information”.  By this, he means that information is prior to, and more fundamental than matter. For instance, I have a thought. That thought exists in my material brain. I can then express that thought in sound waves through speech. Someone hearing can write in on paper, which can be typed into a laptop, and emailed across the world. In this process, the matter changed as the message was passed on, but the information remained the same. It is the fundamental thing.

Similarly, in terms of the origin of life, information is key. At the heart of the living cell is RNA and DNA, on which is encoded genetic and epigenetic information. Nothing can happen in the living cell without their first being coded information. Thus, the question changes from where does life come from, to where does the coded information come from? This is a very different type of question, but it is an easier question for us to answer, for the answer is all around us.

Some time ago I walked into our bathroom and noticed letters in the bath, instead of sitting in a pile at the end of the bathtub. Could they have accidently fallen over? This thought was immediately dismissed as a possibility because in the middle the letters were organised to convey a message. This was not a random collection of letters. This was information, and I knew it had to have been one of my children. Why did I come to this conclusion? It was because I have observed, without exception, that anytime I come across information in the world around me, it has always come from someone’s mind.

Why should I expect the origin of the information critical to the origin of life to be any different? And when we turn to the Bible, this is exactly what it tells us to expect.

Having studied the Feasts of Jehovah, we continue our series on the Old Covenant with three different topics in February.